Who has Hit The Fastest 50 In ODI Cricket Ever?

Cricket is a gentleman’s game played between two teams of eleven players each. The batsman aims to score as many runs as possible by striking the ball without losing wickets to add the thrill to the game. Simultaneously, the bowlers and fielders prevent the scorecard from moving and dismissing the batsmen as quickly as possible.

An ODI consists of one inning of 50 overs per team. To acknowledge and honor the best international cricket players, the ICC issues ‘ICC Player Rankings’, a widely followed system of rankings every year.

Talking about ranking, South Africa is the most successful ODI cricket team as per recent ICC rankings issued in 2020. It has one of the best players, highly skilled batsmen and the best wicket-taking bowlers, and swift and energetic fielders.

It’s no surprise that the Fastest 50 in ODI cricket is scored by no other than a South African middle-order wicket-keeper batsman Abraham Benjamin de Villiers, also known as AB de Villiers. He played the historical innings against West Indies on January 18, 2015, and smashed 50 runs in merely 16 balls. In the same innings, he made the record of striking the fastest-ever century, off 31 balls.

The Superman of ODI

The modern-day batsmen have adapted their ways of approaching the game with an increasing pace in the past decade. ODI is still the most popular format of cricket. Cricketers like AB de Villiers have achieved more fame and success in every form of cricket as their style of batting is aggressive and delightful. He is often called “Mr. 360” due to his skill to play master shots all around the wicket. He experiments with a range of unconventional shots to shift a lot of pressure on the fielding side right from the match’s start.

AB de Villiers is not just a fantastic batsman but also an acrobatic fielder, thus called a “Superman.” Viewers always find power hitter like AB de Villiers treats to watch who prefer to entertain their fans by hitting the ball for a six right from the first delivery of innings.

The Mr. 360 of South African batsman smashed 16 sixes to score the Fastest 50 in ODI. It allowed him to equal the record of Rohit Sharma of hitting the highest number of sixes in a single inning.

He didn’t stop here and kept on demolishing the bowling attack by his outstanding and fierce batting innings till he accomplished the target of making the fastest 100 in ODI in the same innings. 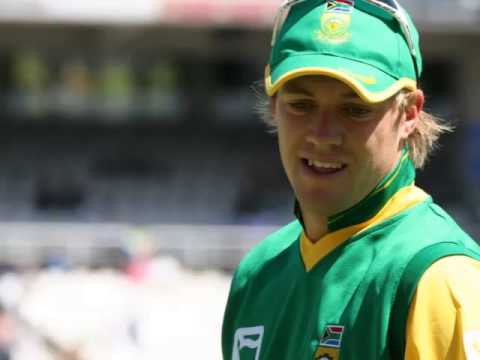 AB de Villiers has been a phenomenal cricketer right from the start of his career in 2004. Officials included him in the team as a wicket-keeper-batsman. Till the retirement of the regular Test keeper Mark Boucher, he was keeping wickets occasionally. Afterward, under his captaincy, he regularly kept wickets for the national side in all three formats.

The middle-order right-handed batsman performed exceptionally remarkably at various batting orders, especially at one down. The 36-years old batsman is known as one of the most destructive and innovative in the modern era, improvising a range of unorthodox shots, especially behind the wicket-keeper. Having a batting average of over fifty in ODI, AB de Villiers has accumulated over 8000 runs, 22 centuries, and 46 fifties.

He served the South African cricket team as a captain in ODI and Test matches and T20. In May 2018, he announced retirement from all forms of international cricket. In January 2020, De Villiers conveyed his intent to make an international comeback and represent South Africa in T20 World Cup 2020.

Apart from having the honor of scoring the fastest 50 in ODI, De Villiers is an accomplished guitarist and a singer. In 2010, He released a bilingual pop album 2010. The album was a joint venture with renowned South African singer Ampie du Preez.

In April 2020, he published his autobiography named AB: The Autobiography. And definitely, his Fastest 50 in ODI is a highlight of the book.

‘AB de Villers is the best batsman in the world by far. He shows it again and again.’ Virat Kohli.