Who Has Hit The Fastest Test Century in Cricket Ever

Test centuries remain an exciting form of cricket. Formally known as test cricket, a famous cricket form played over five days; each day plays lasting over 6 hours. Cricket has always been a point of happiness for people all around the world.

Brendon, a name known for success, is a name that signifies cricket and completes it. In 2016, after losing the toss on a bowling friendly surface, New Zealand was three down for 32 runs in 19 overs. In terms of the Fastest Test Century, Australia was all over the hosts when McCullum took his guard.

Brendon did his best, and even though New Zealand eventually lost the Test, McCullum inked his name in history books. He 21 fours and six sixes in his blitzkrieg inning and tore apart bowling artillery consisting of Josh Hazlewood, James Pattinson, and Nathan Lyon. 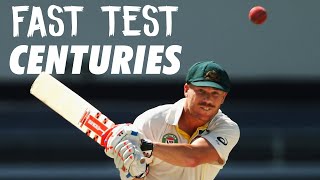 The Fastest Test Century is incomplete without the mention of Misbah. Misbah-ul-Haq’s ability to hit massive sixes is well-known, but he used this skill economically and was content with it most of the time, batting defensively.

His slow batting-style gave him the nickname ”tuk-tuk”, but in 2014, he decided to show the world his hitting abilities. While we talk about the second Test against Australia at Abu Dhabi, Pakistan was 461 runs ahead when Misbah came to bat in the second shift.

Misbah played his favorite heaves on the leg-slide and was bold enough to step down the pitch when the opportunity arrived. He made a name for not only Pakistan but himself in the Fastest Test Century.

During the second Test, while being against New Zealand in 1976, Majid Khan was out for 98 runs on the first day. The pain of missing out on a ton was monumental, and Majid came back with more determination in the third Test.

The result? He slammed a 74-ball hundred in the Test and that too before lunch on day one. Brutal would be an understatement for Majid’s assault at Karachi as after witnessing that knock, and Kiwi bowlers were done and dusted. Majid was strong on both sides of the ground, but his command over his drives was impeccable.

He made his name in the Fastest Test Century. Majid slammed 18 fours and two sixes during his aggressive shift and blasted the new ball to all corner parts. He was finally done in by Collinge when he was playing on 112.

In conclusion, while talking about the Fastest Test Century, it is always a great idea to remember these big names. As cricket continues to be the most famous sports in all these countries; these names continue to ignite the terms of their lands.