What is a Super Over In Cricket and When Is it exactly Played?

How Is Super Over Played?

Cricket’s an interesting game for diehard fans to watch. In spite of all the rules involved, it becomes easier and fun to follow through when you’re passionate about it.

Overs and runs are usually the parts of cricket that trigger adrenaline rushes among fans. What happens when both teams score the same number of runs and the game is almost over?

This is where a Super Over comes in handy and restores order. 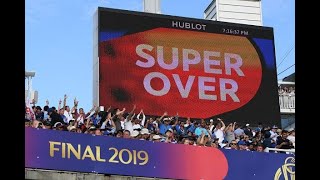 It’s also known as a One Over Eliminator since it plays the significant role of determining the ultimate winners of the match. A super over is mostly applied when the cricket match in question has a limited number of overs.

What’s more, a Super Over also comes about when both teams successfully bat a maximum of 6 balls. Both the batting and bowling teams get an equal chance to pick one of their best batsmen and bowlers to represent their team.

Both teams still have to follow all the restrictions and rules that they did at the main match for a Super Over to proceed smoothly. However, there are a few changes that are ultimately adopted.

For instance, the team that was the second to bat during the main innings is given the privilege to go first during the Super Over. The innings will only come to an end when a team loses a maximum of 2 wickets.

A super over is concluded when the team that scores the most number of runs is officially declared the ultimate winner of the match.

What Happens When There’s a Tie in the Super Over Scores Too?

This has happened before at the 2019 World Cup Final and caused quite an uproar both among the fans and the players. What happens next is that the team that scored the highest number of boundaries from both the Super Over scores and the main match is officially the winner.

This move is with the exception of the boundaries scored during the Super Over.

What’s The Origin of the Super Over?

The very first Super Over was called in 2008 in a match between New Zealand and West Indies. Both teams scored 20 overs and the umpires were at a crossroads on how to determine the winners of the match.

A keen look into the baffling turn of events led to the follow up of every step of the match from both teams. There had to be a deeper look into factors such as innings, boundaries, runs, and deliveries.

Each of the factors played a significant role in shaping up Super Overs as they are widely used in the game of cricket to date. Rules have been drafted on the same to polish up Super Overs and the general outcome of any cricket game.

The International Cricket Council is a sensitive body that’s responsible for a set of regulations within the cricket pitch. One of them is to come up with a set of rules that should make cricket more orderly and enjoyable.

After a series of meetings and deliberations, the ICC was finally able to crack the code of any eventualities in international matches. These are some of the rules they came up with for the good of cricket;

The Super Over rules are not consistent but are changed in regards to the present circumstances. For instance, the rules changed in 1 October 2012 and stated that in the event of a match that’s on a group stage, a tie is declared.

In a knockout match, the Super Over is repeated and continues all through till a winner finally emerges. Initially, the winner was declared depending on the number of boundaries that both teams scored during the innings.

Subsequently, this is followed by the number of sixes that both teams hit during the main match.

For instance, the ICC made some updates in the initial rules in October 2019. However each of the rules stated are only applicable to Super Overs that happen in ICC events.

The ICC is still very keen on the main match to see whether they’ll need to make more adjustments on the same. In the meantime, the current Super Over rules are serving international and local cricket teams faithfully.